​iTunes​ I Spotify I AMAZON 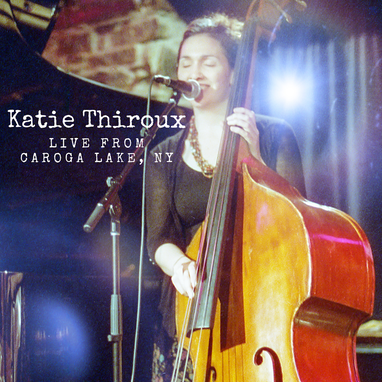 I had no intention of making this performance a live record and I was thrilled when I found out it was professionally recorded because it was one of those magical nights between the musicians and the audience! This performance was part of the Caroga Lake Music Festival of the Caroga Arts Collective in New York. I was joined by Glenn Zaleski on piano and Matt Witek on drums. We had a 4 hour drive from Brooklyn and everything that happened that day influenced the music that night!
First, I drove from Long Island, NY to pick up Glenn in Brooklyn. Now, I am from Los Angeles and people seem to really complain about our traffic...you have no idea if you've never tried to drive in Long Island and tried to navigate those highways, tolls and the insane amount of potholes. I felt like I was in a reality video game where everyone's goal was to drive me off the road - I'll take my LA highways! We made it out alive and into more civil terrain! My first stop on long car ride is to get snacks and water! We happened upon the Taj Mahal of all Whole Foods markets, I wish I remember where it was. I quite possibly could have been a mirage after my NYC driving ordeal. Glenn and Matt apparently had the best pizza of their lives and I found something crunchy and also an incredible loaf of sourdough (that's my road life trick, when in doubt, have a loaf of bread on hand). We piled back into the car and the conversation went from Zen in the Art of Archery, favorite international airports, the state of the jazz business to a game where we tap rhythms of songs and you have to guess without any musical notes. Then Matt started asking Glenn about a specific rhythm technique called "metric modulation" and a drummer that does it very well, Ari Hoenig: - to explain quickly: Feeling multiple divisions of time without having to change the tempo...I know, confusing, right? If you're really bored, look up that drummer. But, it is possible and can be fun. So while I drove, Glenn was showing Matt how to do this just by tapping on their legs and I am sure they got sore! This is an important fact to the performance.

We continued on our drive and we needed a pit stop and we happened upon this park where every activity was an instrument and Glenn and Matt went around and figured everything out (pictured to the right). So up to this point we've had great food, conversation, new music techniques and some inventive toys and this all came out in our performance that night! We arrive in Caroga Lake, put our stuff down and do a soundcheck. Well, it turns out that the drum set was more set up for rock and it was missing a few important drums and drum stool. But because Matt is so creative and go-with-the-flow, he made do with a piano bench and played those drums beautifully and sounded like himself! I lucked out with a nice bass, there was a lot more amplified sound than I would have liked but sometimes, ya just gotta roll with it! Glenn lucked out with an amazing piano in perfect condition. We got ready for the concert and in NY fashion on a summer night, it was HOT and HUMID! I never know my setlist ahead of time and I wasn't sure if we were doing 1 or 2 sets. I usually prefer 1 long set because you can really take it somewhere! The room filled up and I could feel an electric energy from the audience of excitement! I also like to just start - rather than talk then play. So our whole day of conversation spewed out into the music! There were times when I was singing and playing bass and Glenn and Matt would be having fun with those new rhythmic techniques. It was so new and exciting for me to figure out how to fit on top of what they were providing me as accompaniment! Then, add the energy from the audience and it created an amazing night of music and creativity! And I am so happy to share that with you! The record is mixed in a way where you feel like you are right there in the audience! So, if you are missing live music like I am, this will be sure to fill the void! Put it on during a Zoom dinner party or maybe while you're socially distancing and see what conversation it inspires!
Katie Thiroux Trio Live Caroga Lake Music Festival
​Caroga Arts Collective
Recorded August 14, 2019
Recording Services Provided by Marc Wienart of Authentic City Records

Introducing Katie Thiroux may be a first step for this young triple-threat talent, but it plays like the work of a well-seasoned veteran.

There's A Small Hotel; Don't Be On The Outside; A Beautiful Friendship; Wives And Lovers; I'm Old Fashioned; Ray's Kicks; The One I Love (Belongs To Somebody Else); Rosebird; Can't We Just Pretend; Shin Stockings; Oh What A Beautiful Morning.

"A highly recommended disc by a rising star in the jazz firmament."

“Off Beat,” Thiroux’s sophomore release, makes good on the promise of a multitasking talent who swings her bass with a Mack-truck-powered lilt that would make her hero Ray Brown proud, and who transforms her smallish voice into a thing of delight."